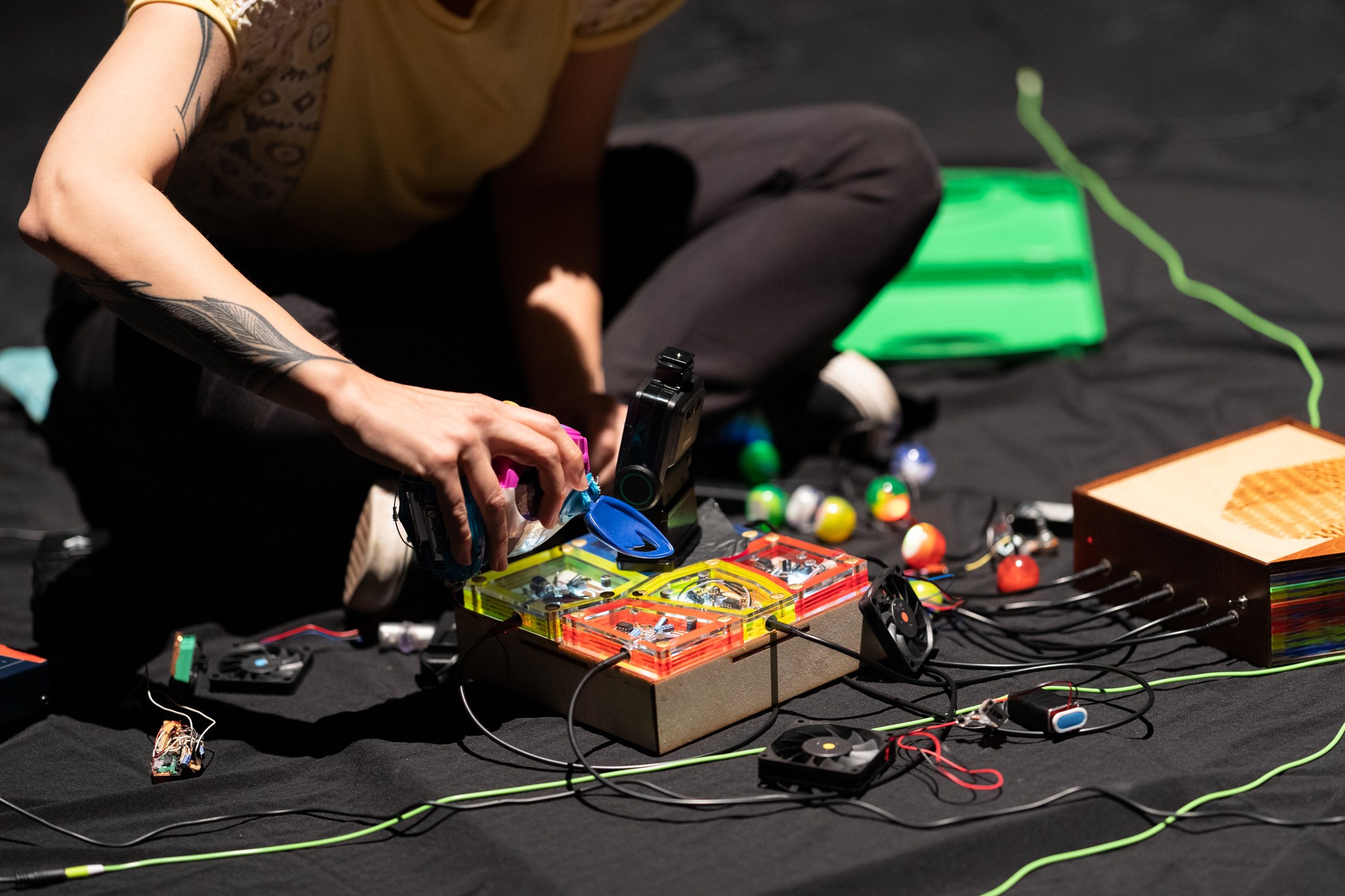 Created during a time of social isolation, multidisciplinary artist Stephanie Castonguay developed Capturing Light Frequencies from the electronic and magnetic properties of everyday objects in her home studio. Using modified scanner heads, Castonguay was able to listen in to the electronic gasps and chatter of minerals, electronic waste and bioplastic as she manipulated them with her own hands.

Castonguay’s exploration of everyday technological objects as musical material hearken back to the roots of avant garde electronic music, recalling French composer Pierre Schaeffer’s 1950s development of musique concrete. In musique concrete, Schaeffer analyzed and notated new music based on how the sounds of everyday objects were transformed through recording technologies. Schaeffer’s experiments in audio recording articulated how technology transformed human perception of material through mediation. Schaeffer would eventually use these perceptual shifts as a basis for challenging the foundational nature of pitch, duration, and musical notation in compositions. I see in Castonguay’s work a contemporary extension of these ideas, however Castonguay’s is a language of sound that builds upon contemporary languages of technological encounter on the level of materiality itself. In making her music, Castonguay exhibits curiosity and sensitivity in the face of a non-human perspective: in doing so, she reveals surprising and somewhat chaotic physicality at the microscale: evoking languages of materiality relative to energy exchange, encounter, and communication. Noise is just one natural outcome of this work.

As Donna Haraway wrote in her 1989 Cyborg Manifesto: writing, power, and technology are older partners in humanist and modernist Western stories of the origin of civilization. Today, she says, “our best machines are made of sunshine; they are all light and clean because they are nothing but signals, electromagnetic waves, a section of a spectrum, and these machines are eminently portable, mobile — a matter of immense human pain in Detroit and Singapore. People are nowhere near so fluid, being both material and opaque.” Castonguay’s work tells a story of interaction between the opaque human body and these quivering electronic worlds: one that is organic, fragile, and darkly contemplative. Developing DIY technologies for making the normally imperceptible energies of technological objects audible, Castonguay’s music is perhaps not best understood through musical writing and notation, or even timbre and gesture, but rather upon fragile sensitivities and emergences of the normally invisible encounter on the material level.

Castonguay builds upon a contemporary evolution of avant garde musical language, one that emphasizes today’s seemingly immaterial materialities of constant connectivity, the ubiquity of 5G radio towers, and the growing dependence humanity has on infrasonic waves that crash and penetrate one another independent of our perception. While noise and glitch are embraced in Castonguay’s work, Capturing Light Frequencies does not appear to be a fetishization of error, failure, loudness or excessive signal. Instead, I see in the noisy materiality of Castonguay’s work echoes of sound studies scholar Marie Thompson: that glitch and noise go beyond these dichotomies of wanted sound (signal) and unwanted sound (noise). Adopting Thompson’s metaphors, one can also consider noise as the material soundings of communication media themselves: the materiality of technological utterance when it meets human perception, when mediation makes the once immaterial real.