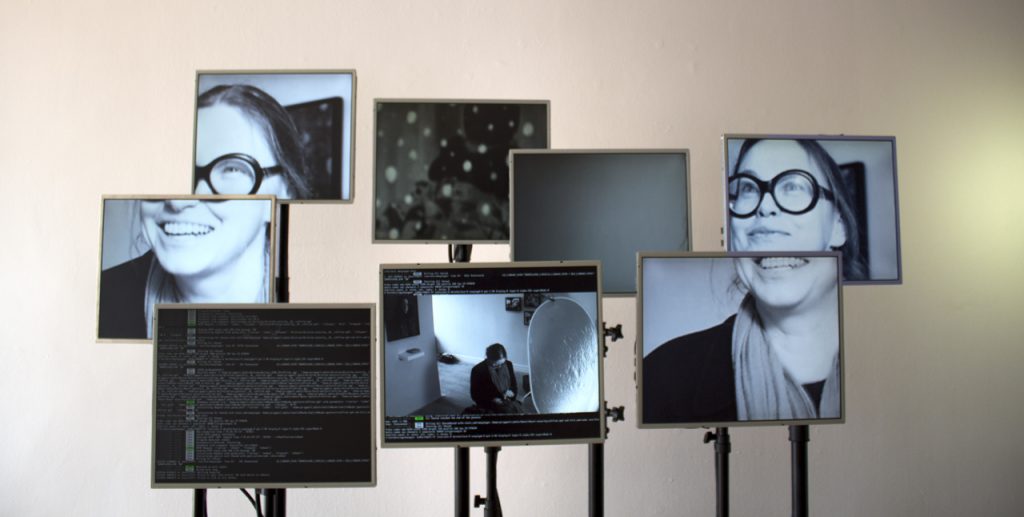 With paintings that capture key scenes of childhood in the Kapuskasing area alongside photos and videos of people from the community of Sudbury, the exhibition Portraits offers an encounter with familiarity. My encounter happens on two levels: I recognize faces that I might see again soon on downtown streets, and I remember winter memories that I look forward to recreating as I settle into my new home community of Sudbury.

There is always falling snow. It’s omnipresent in the paintings that Natalie Rivet exhibited at the GNO in February and March, evoking happy days of childhood spent ice fishing, snowmobiling and snowshoeing. The artist’s snowflake-covered memories are familiar realities for most residents of northern Ontario. Bundled up in fluorescent snowsuits, the figures in the paintings allow me to gaze freely into their dark, but smiling eyes. Their faces seem to light up, come alive and invite me to join them, to venture into the snowy underbrush with webbed sinew fastened to my boots.

The sense of intimacy I feel in these portraits is like browsing through a family photo album and remembering how sweet life is in childhood when you’re swaying along on a sled. These faces reddened by the cold, frozen in the moment by the painter’s brush, have a life of their own, not just here, but elsewhere, in photos from her family archives that Rivet has chosen with care. In fact, her paintings consist of reconstituted snapshots that her father captured with a film camera, the vital device for creating instant memories in the 1990s. Rivet undertook this task in order to share these moments with her grandmother, but also to understand her position within her clan. Her new compositions of these scenes may add or remove some family members, allowing her to claim her place as the youngest daughter of a large family in nostalgic pictorial works.

A remarkable aspect of these wintry-hued paintings is the direction of the subjects’ gaze. Fully aware of the lens, they proudly strike a pose for posterity. Knowing that you’re being looked at changes everything. It might also be that viewing a developed photo weeks after the shutter clicks somehow changes self-perception. Not being able to see our image immediately after it is captured avoids us the experience of discovering, sometimes with some surprise, that we look like that; others see us like that. With the advent of digital photography, this reflex has become commonplace and it intrigues Aurélien Muller, a Toronto-based artist who has collaborated with Rivet in this exhibition.

In his current practice, he calls into question the habits of consumers of images in our digital era where everyone can dabble in photography. Focusing on the portraits of today, he questions their composition, as well as what hides behind them. His installation, facing Rivet’s paintings, is essentially a wall of bare computer screens that quickly flash unintelligible code, along with a series of faces which I gradually learn to recognize. Here, the subjects’ gaze is not as intense, because it is often directed toward the bluish glow of a cell phone. This thoroughly modern accessory, truly an extension of the human body, sneaks its way into the portraits almost automatically. The device facilitates Muller’s meeting with his models, who jump at the first opportunity to take refuge in the virtual dimension. Instantaneously connected with others, absorbed by their screens, people relax; they no longer pose for the camera and even forget that they’re being looked at. Cyberspace has whisked them away, and that’s what makes the portrait so natural: the mask falls and exposes a subject who is no longer playing a part.

Ironically, when I was invited to have my photo taken, I decided not to bring my cell phone. The palpable emptiness in my pocket and my palms felt like a phantom limb and I was forced to look at Aurélien during the photo shoot. The cell phone as a crutch for human interactions, always within reach, contains a wealth of information, like digital DNA made from our data. Whereas in Rivet’s paintings, the quest for identity revolves around nostalgia and the family clan, for Muller, it is based on connection and the (over)use of portable devices. The persons who posed for him become exposed, firstly on the computer screens, secondly by their data, and thirdly in the installation that stands in the gallery space.

The end result of these two artists’ collaboration rises like an igloo made of cathode TV screens, the intermediate technology between the two time periods and the two media used in their works. Simultaneously static and moving, a person’s image is recomposed for a brief moment on screen. The composition is duplicated: it appears as both a black and white photo and as several traits painted directly on the pixelated surface. It is not meant to last; after a brief moment, the image disappears and another portrait takes its place. Still static, it appears again two screens away, but now it is covered by another person’s silhouette. Many persons are superimposed in this manner, before finding their rightful place behind their appropriate twin image defined by Rivet’s painting.

I sit there long enough to see faces reach their own place, united by two media. I begin to recognize some of them, distinguishable by their build, their conspicuous glasses, their shy smiles and especially their phone, which each subject holds preciously. Like a game of Guess Who? displayed on the sacred screen that once served as a place of communion, portraits of a community are produced over the course of several steps. Snow crackles in this unexpected but not inconsequential canvas, reminding us of the snow that sparkles on our memories, those that we uncover in photo albums of times past and those that we create and share with a simple click. Portraits, intimate and social, static and mobile, nostalgic and contemporary, draw me into these two artists’ world and project me into a dual dimension that is as paradoxical as a spring snowstorm.