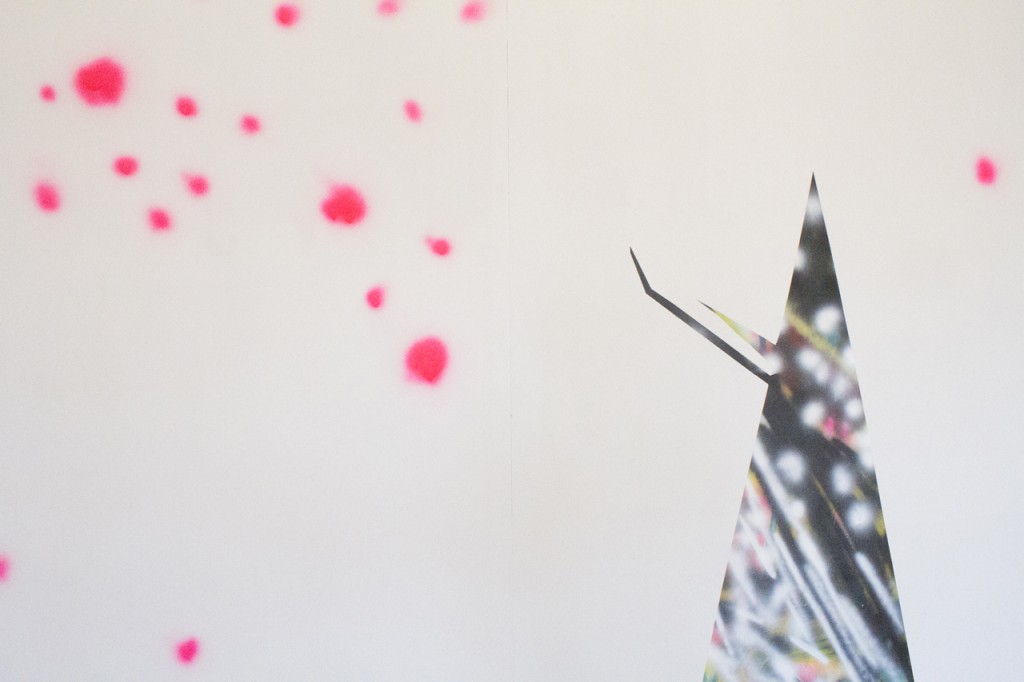 We cross a threshold from streetscape into La Galerie du Nouvel-Ontario (GNO), moving from the bland quotidian sights and sounds of everyday into an imaginary universe. This is an environment electric with bright colours that dance across the walls and floor. For one week the gallery’s exhibition space became the temporary studio of Gatineau-based artist Jennifer Lefort. This is her life-sized canvas upon which she creates a site-specific installation, titled Chromadose. Lefort intoxicates the space with bursts of acidic colour that give way to abstract forms, which then morph in and out of shape.

Lefort is a master of colouration, it is in fact the point of departure for her abstract paintings – a practice that is some fifteen years in the making. Having been recipient of prestigious honours like the Joseph Plaskett Award, Lefort has gained an enviable reputation for her painting not only in Canada, but on the international stage. Even more recent evidence suggests Lefort’s gravitas continues to grow – her work garnered global attention this year at the prominent art fair Volta 11 (Basel, Switzerland).

Over the years Lefort’s paintings have grown large and her interests have moved beyond confinement of the canvas to include sculpture and temporary installations. This was inspired by her collaboration with Dominique Pétrin on a site-specific installation at Optica Gallery (Montréal) in 2014, where the duo of artists transformed the exhibition space by a process of “creative exchange”. It was at this point that she realized she could “virtually paint in space”. At GNO Lefort advances this exploration by not only painting directly onto the walls of the gallery but by also introducing three-dimensional elements that push further her transformation of the white cube.

As we enter the gallery our eyes, and body, are immediately over-powered by a massive, hard edge polygonal shape on the gallery’s west wall. This shape stretches up to the ceiling and grows wide as it spills onto the floor in lakes of blue, black and magenta Mactak – so much so, that the viewer risks stepping into these pools of colour . Within this shape Lefort starts with a black base that she quickly brightens by vigourously applying lines of yellow and red that shoot out and around. Like road dividers, these pull our eyes from the shape’s lower right side to its left, and finally shoot out the upper right edge where the wall is left white, only briefly.

A luscious bubblegum pink blob pierces forth out of the wall, spurting out black dots. A series of ocean blue lines project out and over it ending in drips near the base of the wall. Pink tentacles grow from its right toward another polygonal shape that almost frames this blob with its ‘head’ leaning left in an embrace. Interestingly lines of the same bubblegum pink dominate this dark hued form of blacks and blues, its base spilling onto the floor in pools of yellow and white. Its right side pushes out and up against the north wall of the gallery where a spattering of bright pink dots frolic along the wall toward a hard-edged, cone-like shape sprouting up from the floor. This form is infused with splotches of black, blue, red and yellow with two antennae reaching out of its top left side sucking up the pink dots.

As we move to the east wall of the gallery, high above our head is a larger polygonal shape that drips down from the ceiling toward the floor in a series of vibrantly coloured stalactite-like shapes. It’s as if we have vertiginously parachuted from the cosmos and landed in a grotto. Bright yellow dots move out from these stalactites toward one last hard-edged form that extends up from the floor in a somewhat phallic shape. Of diminutive scale – it is slightly shorter than me as I look down on it – this form is filled with a more subdued colour scheme. Only from the tips of its few antennae, do we get a glimmer of bright yellow and red. This form swells onto the floor in a long, thin rectangular pool of black mactak that extends out into the centre of the space like an elongated shadow whose light source is beyond comprehension. Its’ tip points toward a little island made out of bright pink mactak onto which stands a column of brightly coloured bricks. There are two bricks set haphazardly aside the column as though someone, or something, was in the middle of either building it up or taking it down.

As with her works on canvas, we witness a familiar palette of playful colour and forms that float, sprout and ooze into, across and over each other. Through her skillful use of layering and repetition, Lefort has an adept way of creating ‘unsettled’ scenarios that feel as though they are in constant movement, within liminal spaces on the brink of transformation.

[A form conjures up another until a feeling of unity is achieved, or the impossibility of going any further without destruction. During the execution there is no thought to content.]

Bringing only a few materials from her studio, Lefort arrived at GNO on a Monday morning and was confronted by a blank white cube. She came with no preconceived ideas or preliminary sketches. The creative process was to be driven by her immediate surroundings – its shapes, sounds, light, shadows, cracks, bulges and imperfections. She is seemingly guided by the spirit of Paul-Émile Borduas –one of her Québécois abstract painting predecessors. His pen inked the controversial manifesto Refus Global and he was the main instigator of what became known as the Automatistes movement of 1940/50s Québec. Fascinated by the authenticity and spontaneity of children’s drawings, he pioneered a creative process influenced by the surrealist theory of automatism. This is a method where one paints with no predetermined ideas, letting immediate sensations and surroundings inspire and guide the development of a work of art. The idea is not to think but to play and experiment – and in Lefort’s case, she afforded herself plenty of possibilities with the array of materials from spray paint to Mactak and building blocks culled from her studio.

Spray paint being very unpredictable it inevitably lead Lefort to a number of discoveries. As it dries quickly Lefort had to work quickly and this sense of urgency and excitement flows through the work. The rush the artist had working within a new space, under a tight timeline and, experimenting with new materials is palpable. Walking within the installation one is taken by a strong feeling of exuberance and excitement for the unknown.

As she started working directly on the walls forms started to evolve, letting the walls, ceiling and floor speak to her through their various imperfections, a narrative began to develop and her gestures of paint sprays and smears flip-flopped between contained and uncontained spaces. As with her octagonal shapes, Lefort chose to contain her gestures within a precise area by masking out a space via painters tape. With her cunning play of colour, light and shadow along with the hard edges these octagonal shapes seem to jump out from the wall, standing out like monoliths hovering over the viewer. Then we have the bubblegum pink blob that feels as though it is piercing through the wall and into the space, exploding out toward the viewer. She has a unique ability to use her painting and sculptural components to subtly reconfigure and reorient the space in which it inhabits.

There is a performative sensibility to Lefort’s intervention that makes it feel still in-process. That possibly at any moment the artist will walk in and pick up one of those bricks and place it on the top of the column or, possibly to continue its dismantling. We are made aware that what we are witnessing is not fixed, in a constant state of flux. Evoking a fearsome ephemerality especially given the eventual destruction of the work. This installation will inevitably be dismantled and painted over once the exhibition has run its course.

Lefort has truly taken possession of the gallery’s exhibition space and temporarily transformed the white cube into another world. With this installation we are given a universe where she is truly mistress, here within la GNO we are immersed within an imaginary world of Lefort’s making. Giving the viewer over to a liminal, hyperactive, convulsive abstract dreamscape. Her process conveys a deep curiosity and playfulness that motivates a constant experimentation with form, colour and space. An artist who, combining solid swaths of colour and extravagant splashes, toys with perception and depth, constantly questioning how much visual activity the eye can register while remaining within its comfort zone, an ongoing play between chaos and order.